A room full of memories

This weekend my mum celebrated her 70th birthday and as it was a special occasion, I'd decided on a special present. We're very lucky to share our love of miniatures and I thought it would be nice to give her a room box that reminded her of all the things she loves.

So without further ado, here's the completed room. The accessories won't mean much to other people but most of the items in the room mean something to us.


The photo above was taken in the middle of the day so the lights aren't having much of an effect but in the shot below you can see they do really light up the room.


When I started this project I had the idea that I would do all the work and that would make it more special. Then I realised that actually it wouldn't be much of a present if the walls fell down and there were bubbles in the wallpaper so after buying a kit and the necessary items to decorate, I handed it all over to my dad.

First he built the box. 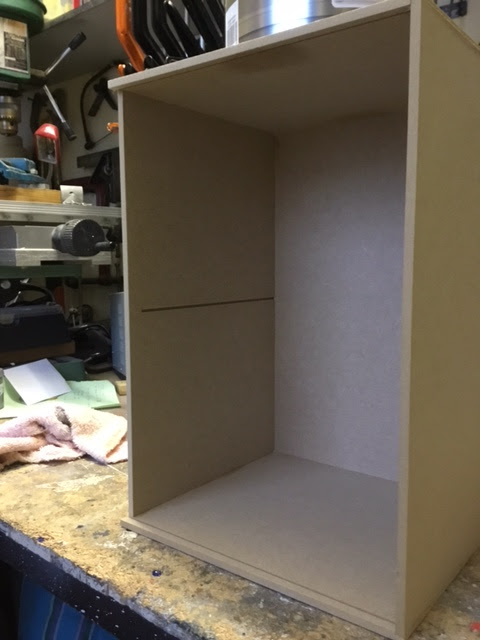 Then painted the outside and the ceiling. 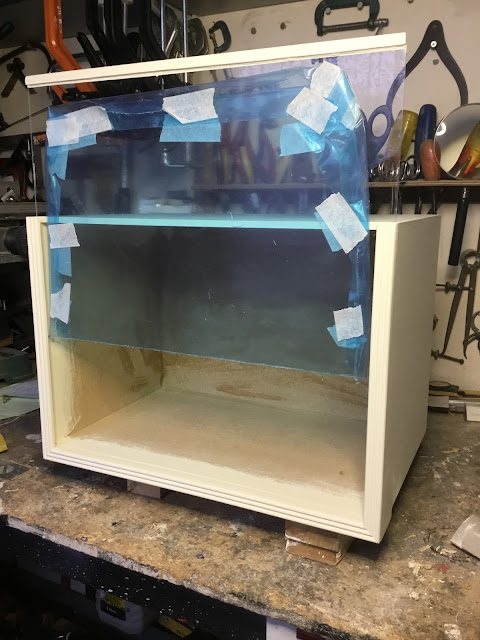 And finally came the decoration. 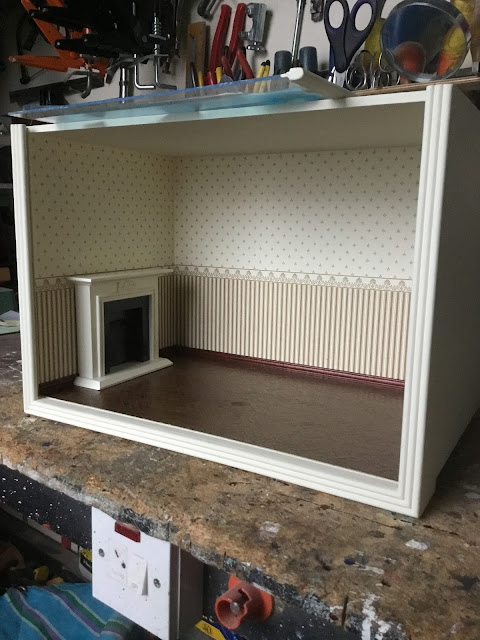 He not only did a great job in putting it all together but also managed to keep it a secret for the last couple of months (although there was a close call when my mum returned early from an outing on one occasion).

As I'd hoped, rather naively, to assemble the room myself I went for battery lights for the first time, knowing full well that electrics would be well beyond my non-existent DIY skills. I'm really impressed with the ones I ended up with from Minimum World but this was the second attempt at lighting the room.

When I unpacked the first lot of lights that arrived I loved them - until I turned them on...


Not only was the bright white light very harsh, it didn't do a particularly good job of illuminating the room either. Next time I went online I made sure I searched for 'warm white' but unfortunately couldn't find a standard lamp with the right colour bulb so decided on a ceiling light instead.

Buying miniatures online isn't ideal as it's so difficult to judge the quality of the piece. But with so few shops around these days and the big fairs few and far between, I was forced to search the web more and found some great new sellers. I'm particularly fond of the cheese plant in the corner (we had one in our lounge when I was growing up) from Ladies Mile Miniatures and the wrapped presents and bouquet from Janet Goodrick Miniatures.

You may have noticed the room is all set to celebrate a birthday. There's a '70' cake on the table alongside some 'happy birthday' plates, as well as a bottle of white wine and a couple of glasses (we do like to share a little glass of Pinot). 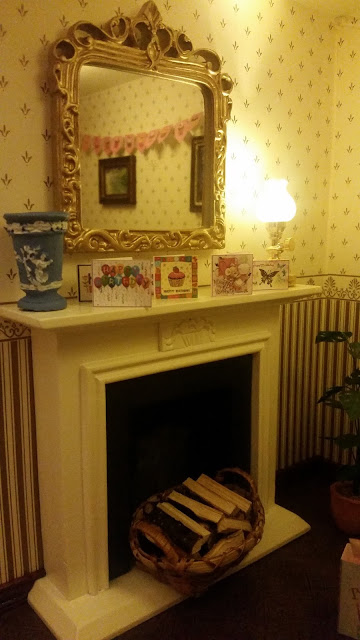 On the mantlepiece you can see some birthday cards, one of my many purchases from Dinky Delights. I actually bought these at a local dollshouse show we went to last month but I couldn't blog about it as most of the things I came home with were for the room.

I also bought the mirror there and the Wedgwood vase - something I'd been looking for for a while. My mum has always loved Wedgwood so I really wanted to find a piece for the room.

The log basket was also purchased at the show, as was the flooring and the sofa just out of shot so all in all it was quite successful. It wasn't always easy as my mum was there too but I think I just about got away with it.

I also bought some fudge from Dinky Delights but as it came loose I needed to make a box for it. Easy, or so I thought...


I was quite excited about finally using the skills I learnt in maths many, many years ago to draw a box. I thought it was all going well until I discovered the flaps were far too small to actually stick the box together. Cue lots of swearing, soggy cardboard and the realisation that the box was probably too big anyway.

My second attempt (on the left) was much more successful and was stuck with Tacky Wax. For non-miniaturists, this is an amazing little pot of adhesive that allows repositioning. I ended up sticking everything in the room down with it as I knew it had to travel in the car. Amazingly, nothing moved despite a couple of abrupt stops on the journey to my parents'.


I wanted to put more books on the shelf but I also wanted them to be seen clearly so settled on a small-ish selection. The Haynes manual might seem odd but my mum had a much-loved Mini when I was younger so I thought it was a must. Next to that is a gardening book as that's another of her hobbies and the shelf below is full of Catherine Cookson novels I found on eBay. I love that they look slightly worn and well-read. The bottom shelf is reserved for children's books including Noddy as the birthday girl has been known to go out dressed as him.


All the pictures in the room have some meaning. On the right are my parents in one of my favourite shots of them. I took it on my birthday last year and I think they look so happy. Next to that is an image of our wedding with my mum and dad on either side of us and in the corner is Alice - a big part of our family now.

I made the Shaun the Sheep calendar as my mum gets one for Christmas every year. I searched everywhere for a Shaun or Gromit that was close to 1:12 scale but had no luck so the calendar was a way to get Shaun into the room and also to highlight the date - 4 March 2017 is circled.

On the side are some favourite snacks - a tin of shortbread, a box of Turkish Delight and the fudge that caused so many problems!

Just to give you an idea of the scale, here's my mum peering into the room. Despite appearances, Alice is not sitting on her back.


I'm pleased to say it's already found a home between the cafe and the seaside stall, although the fisherman's hut is temporarily homeless. One day I'll tell you about all of my mum's miniatures, but that could take a while.